Yesterday I decided to start improving my workflow. It’s been something I’ve had planned to do for a while. Simple things like cleaning and organizing the studio, creating folders and archives on my computer etc, buying external hard drives that I can store things on and make portable. Basically, everything any studio should do to get ready to create. It feels odd saying all of these, because in my head you should be able to create whenever you want with whatever you want, but to be honest when you have a day job, a house to clean and everything else to do with life it can be hard to simply sit down and start working that creative mind,  so these are simply things that I’ve done to make that process easier.

It’s something that should be done regularly if you’re anything like me. I have a habit of pulling out mic stands and cables, then just leaving them out set up thinking ‘I’ll use that again soon’, when in fact what really happens is I look through the doorway and go ‘It’s a mess in there, I don’t wanna work in there until it’s clean’. This just sets you back further, and discourages you from actually using the studio. So a rule I’m going to try and keep now is tidy after each session. This means that it’s clean when I next want to use it, and I don’t have to spend two hours cleaning it up again before being creative.

This might seem random, but it can be a very important part. So often I’ll open up track, and find that files are missing, or I can’t find the track I want to work on, or that preset that I thought I had saved. Also having tonnes of copies of tracks scattered around the hard drive, never knowing which one was the most recent edit. There are a few things that I’ve done to improve this.

1. Create a folder system – This is something that really effects your workflow, it makes it easy to find things and means that sorting out stuff in the future is a lot easier. This actually took me a few days to sort out, as the first thing I did was ARCHIVE. It’s so easy to just accumulate all of your work and leave it where it is. This just takes up HD space, and slows down your computer, you also then end up with shed loads of copies, which becomes even harder to sort out when archiving, and even worse when you’re trying to keep two different computers organized. So, what do these look like? It’s simple. 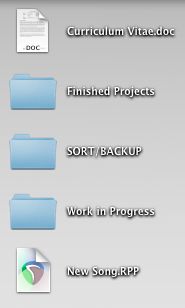 On my desktop I have these Icons/Folders, and that’s it. I have a copy of my CV (as I’m currently looking for more work) but obviously it’s useful to have this handy when applying for work, or to add to. It also means that I don’t have to go crawling through all my documents to find the most recent copy. The Next folder is simply ‘Finished Projects’. This is what it sounds like. When I’ve finished a track or recording, the project folder and bounce go into this folder, ready to be called up if needed, but more importantly, it’s now out of the way, and I don’t feel like I have to go back and work on it again. It’s FINISHED. 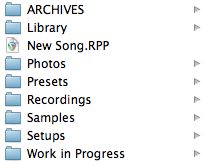 Secondly I have a portable HD. This has a similar file system to what I have on my desktop, but it’s used to switch between computers when I’m wanting to work on different things. For example if I’m working on a mix down, I’ll be using it on my desktop to take advantage of my monitors, so I’ll open up the ‘Work in Progress’ Folder and work out of that. I have a samples folder so that I know where they all are, presets, so that I don’t lose them all the time, Archives for backup and finished work, then some of the others are obvious. It’s always useful to carry around a folder containing backups of Install files also (Setups), in case you ever have a system crash whilst you’re on the road and find yourself having to re-install all of your drivers etc. Yes, you can go and download them all again, but if you have access to them straight away, it makes life a lot easier.

Now this is something that I’m actually going to post separately, and look into with a little bit more detail, but I’ll give you a general idea now. Templates can be useful for a number of reasons. Obviously if you’re a DJ using something like Ableton Live, a you can set up a project/template so that you can just drag tracks in, warp them, and have the project ready with your favorite control surface so that you’re ready to mix straight away. Another reason which I have discovered more recently is simply to break the barrier that stops me from being creative, and that’s the ‘New Song’ syndrome. What is this I hear you ask? Well, basically when starting a new track you might start with a synth line, so you open up your software (wait for it to load) then you create a new track (wait for it to load) then you drop a VST onto the track (wait for it to load) then you create your instrument (bass, sub, kick, whatever). Ok, so you’ve done that, now I don’t know about you but I’ll pretty much EQ everything, so you drop an EQ on there, then maybe a compressor, then maybe you set up a send to some reverb, delay, distortion or whatever else the kids are using these days.

Hey look, we’ve made ONE track with a few notes and we’ve had to do all of that? How about the other 20+ we’re about to add to that? You may realize I’m getting frustrated, this is purely down to the fact that I’m annoyed that I never did this years ago.

Below is a screen shot of a template I’ve recently created to cure this itch, and in my next post I’ll be going into more details on what it contains and why I’ve done it, and also I’ll be posting up soon as to why I am now using Cockos Reaper, and not using Ableton or Logic etc.